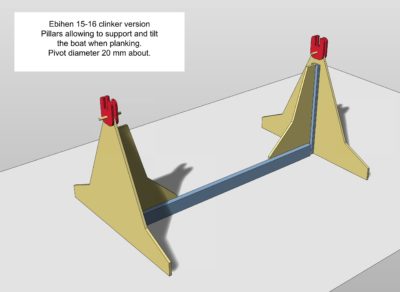 When building an Ebihen, Icarai boatbuilder had the idea to assemble the boat structure upright, and then turn over the hull for planking. Then, the boat is suspended to two pillars, allowing for tilting it on either sides, allowing a more confortable work. Up to now, this method was explained in my plan, but leaving each builder to make these pillars. Upon demand of an American builder, I have now made a specific design of this device.