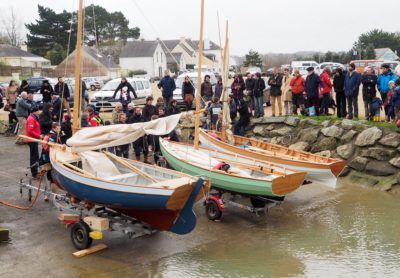 Skol ar Mor is a high-level school, training traditional marine carpenters. During the 2 years course, the apprentices are building several boats, in order to learn various wooden boat techniques. In January, the school launch boats built during the first half-year, generally small boats. A team of 3 was in charge of each boat. In the meantime, a larger boat is built, started in September and launched end of July. Many people were present during this winter launching ceremony, ascertaining the excellent quality of work done. On January 23rd 2016, 3 boats have been launched: