You are here: Home › Blog › A Koalen 17 home built in the Shetland islands 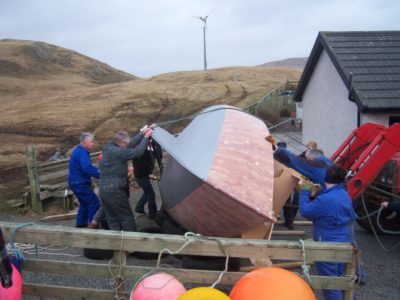 A Koalen 17 under construction by Andrew Cooper in Walls, Shetland Islands, has been turned over. This is the second Koalen 17, the first one having been built by Icarai in France. Andrew sends me the following message: “The only significant difficulty so far was getting the twist at the front end of the bottom plank. Because of the rebate cut in the edge of the bottom plank to take the top layer of planking, I could not get enough clamping pressure to make the plank sit properly on the stringer. My solution was to glue another short length of stringer between frames so I could clamp down on the full thickness of the ply, and this worked well. (so was actually triple rather than double stringer).
Really enjoying the build so far. Hoping to be finished by next spring”.

Some days ago, I have been asked to have a diesel engine in a Koalen 17. My answer was that there is not enough room for that. But it is possible to build an enlarged boat, almost identical and which will be named Koalen 18. See here a presentation leaflet of this boat. If somebody is interested, I may prepare a set of plans and building instructions.