You are here: Home › Blog › Three Ilur gathered in Maine 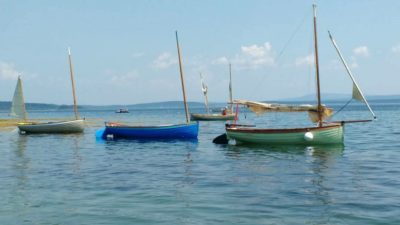 These last years, more and more “vivierboats” are built in various countries and in particular in North America. So, I can not resist publishing this photo recently posted on Facebook. Three Ilur are gathered. As John Hartman says, the gathering is the Small Reach Regatta, held on the Maine coast for sail and oar style boats. This year there were about sixty boats in the fleet, which sailed around Herrick Bay, Blue Hill Bay, and the eastern end of the Eggemogin Reach. Happy to say the Ilur is catching on in New England!

From left to right, you see the lug yawl rigged Ilur of John Hartman, the standing lug rigged one of Peter Mumford’s built by Geoff Kerr, and the lug sloop rigged one of Christoph Harman. Most of these boats are built from a kit marketed by Hewes & Co. The three major rigs of Ilur are shown on the same picture!