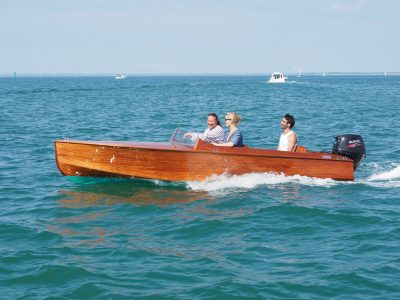 This runabout has been built by Skol ar Mor, the famous French wooden boatbuilding school. She is a replica of “Sunray”, an american runabout drawn by Seattle designer Edwin Monk in 1932.
Length: 5.03 m, Breadth: 1.52 m. She is delivered with a Suzuki outboard (30 hp) and a trailer.
Oak frames over a mahogany backbone. Hull planking, deck, seats in varnished mahogany.

The runabout has been launched in august 2015. She may be seen at Skol ar Mor, Loire-Atlantique, France.